Exile
As part of the exhibition ‘New Imaginings: Photographic Journeys of Asylum Seekers and Refugees’, I exhibited the paintings below at the Janet Clarke Hall, The University of Melbourne, October 2009. I also read the poem "Exile".  The unedited version of this poem is at the bottom of this page. 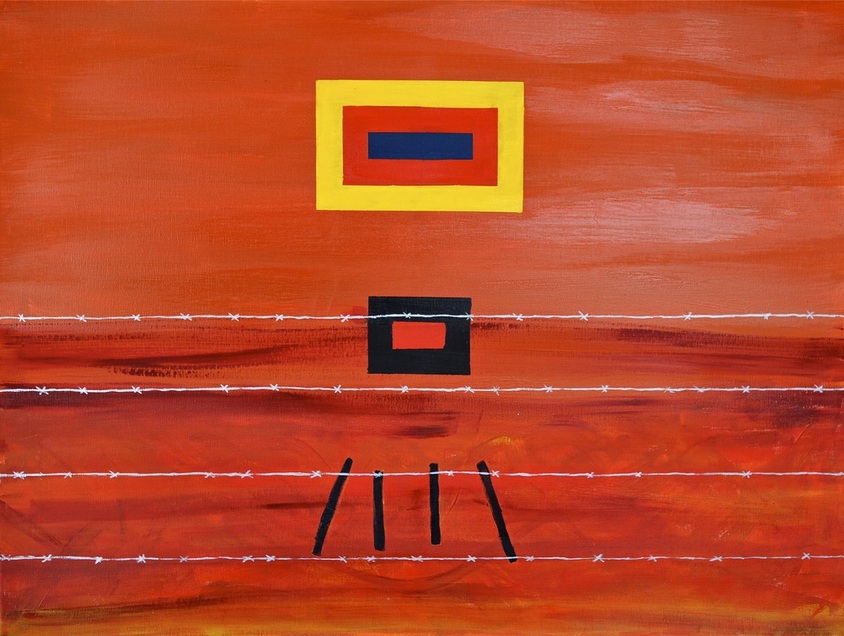 Exile. Me dejo atras compañero! (You left me behind, comrade), 2008, Acrylic
“Me dejo atras compañero!” (“You left me behind, comrade”), 2008, Acrylic.
This is a painting that reflects on the Guatemalan civil war, which lasted for 36 years.  At the peak of the conflict during the late 1970s to the early 1980s, thousands of people disappeared; several thousands were killed and there were five hundred thousand refugees. The Guatemalan student movement was almost eliminated by the military, with many students tortured and forced to denounce others.
This is a painting to the memory of those who disappeared and whose lives were sacrificed during the years of conflict.  The poem “Exilio” is linked in spirit and sentiment to this painting.
It is dedicated to Eliseo Balcazar, a Guatemalan activitist, who arrived in Melbourne in 1988, under the auspices of Amnesty International.  Eliseo passed away eleven years after his arrival.

After the blood letting. 2009.
Acrylic on canvas. 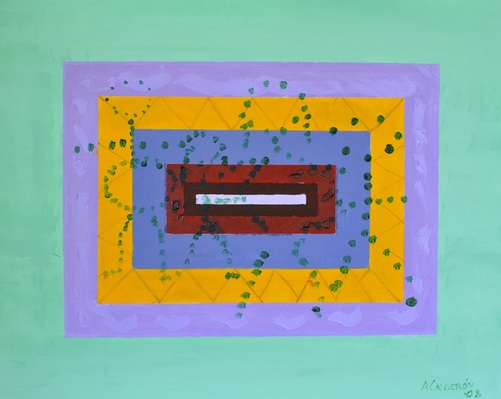 _ A Happy Family Day in Zaculeu”, 2007. Acrylic on canvas.
Zaculeu is in Huehuetenango, in the highlands of Guatemala.  This is the memory of a happy family day sometime in 1975.

As read at the opening of ‘New Imaginings: Photographic Journeys of Asylum Seekers and Refugees’, at the Janet Clarke Hall, The University of Melbourne, October 2009.

As I ponder how to bring closure
to one of my many diasporas
I came into contact with Hugo
- the fellow countryman who
welcomed me upon my arrival
at the Midway migrant hostel Down Under.

Twenty-two years later
(four presidential terms,
a peace treaty,
a generation,
a sweep of centuries in between)

I saw him by accident
when I stopped to greet
another man whom I last saw
seven years ago
- at the funeral of my fellow countryman,
the revolutionary and poet Eliseo.
The official statistics suggest there are
one hundred Guatemalans living in Victoria -
almost three hundred across Australia,
miraculously close to one million live in Uncle Sam's land
- twelve per cent of the population abroad.

During the years of conflict
400 villages were erased from the map.
Five hundred thousand Guatemalan peasants
were uprooted from their small cornfields,
fleeing to neighbouring countries.
Hundreds of thousands of students, intellectuals, community leaders
fled abroad,
the lucky ones escaped via diplomatic conduits.

In the new century
there are plenty of Aussies
who venture into my country
and fall for the idyllic Mayan nature
and bring back photographs, textiles and worry dolls
but no one brings the magic worry doll
to take my worries away.

Melancholy of all
Remains in tact in my soul.

The solstice of the years of conflict
parades in solitude
around the safe ground of my neighbourhood.
I salute the melancholy
beyond the intellectual border
of an eventual return

Hugo my fellow countryman
whom I lost contact with
eighteen years ago
is planning his return to the motherland
bringing fulfilment to his dreams
shattered by years of conflict.

Hugo told me that another fellow countryman
died in his arms three years ago.
They shared solitude in times of happiness and despair.
So I have figured we are now ninety nine Guatemalans.

Melbourne is my adopted home.
Let me twilight here till
the memory of a future past long gone
brings the winter solstice
to a happy symphony.