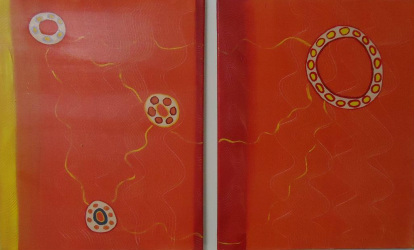 An exhibition and talk on the theme of Uncertainty, Creativity and Art (download flyer in PDF format), held at at The Institute of Postcolonial Studies IPCS, North Melbourne on September 2013.

Commendation from the Member for Derrimut Mr Telmo Languiller in the Parliament of Victoria on 15 October 2013.

A life of certainty brings complacency whereas uncertainty boosts creativity.

Through painting I found a way to express what has been a lifelong response to dealing with uncertainty and adaptation. Certainty has not been the norm in my life; it has instead been an ephemeral passage that I idealise by the shape and form of the strokes which are latent in these paintings. The ability to adapt has been critical for survival.

Uncertainty
The art of uncertainty:
Childhood memories are multiple, disperse and perplexingly naïve. I have happy memories growing up in San Marcos (250 kilometres west of Guatemala City); day to day life seemed to be full of discoveries and the experience of something new. Recalling such memories, bringing them into sequence and finding their meaning is challenging as I have realised the ambiguity of conflict.

Creativity
The art of reconciliation through creativity:
I have always derived enjoyment in writing poetry but it has been more a matter of expressing raw emotion of a particular experience, sentiment and nostalgia. In finding ways to manifest conflict, the nature of conflict and its state on our well-being, painting has become a medium through which I am able to establish a dialogue between those unfamiliar with the reality of conflict and those who have experienced it. It has also become a vehicle to keep alive the spirit and the presence of those who are no longer able to express their experience.

Art
The creative process:
Through painting I found a way to express what has been a lifelong response to dealing with uncertainty and adaptation. Certainty has not been the norm in my life; it has instead been an ephemeral passage. The ability to adapt has been critical for survival.

The art of exile - for me is a way to find an explanation around conflict, understand its meaning and implications for everyone who has experienced it. It also enables me to survive, and to strive for a broader explanation about its consequences for society in general.

Invariably, as individuals we evolve, age and follow our path in life surrounded by people who mostly only know the life journey that we reveal to them. There are also many others with whom we share similar experiences, from whom we draw comfort and share life paths. For many years, I sought to repress the nature and the complexity of the conflict which prompted my departure from Guatemala. Vinicio’s disappearance and the events that followed were simply too painful to speak about. Silence is one way to strive for harmony but that can only be sustained for so long.

My sense of identity is broadly defined by these experiences as well as my Australian journey. It was fortuitous that I arrived in Australia at the time I did. I was presented with many invaluable opportunities to grow, develop and to become who I am now. It provided me with the space and time to deal with my sense of exile and uprooting; and to reflect  how best to blend the past and  present.  Exile became self-imposed exile and it has been an enlightening experience blending cultures, languages and traditions.  But at times there is a sense of  ni chicha ni limonada (belonging neither here nor there). That is how life is and it is that experience that I seek to manifest through my paintings.

As Australians, we are now considerably closer and more connected to every other part of the world than ever was possible. We are able to share experiences, have a refined response to the challenges of the present, and in an idealised form we seek to address the vagaries of life with a view to everyone having a safer and better future.

Through painting I seek to engage in a dialogue with people from all walks of life about common life experiences; to enable a sense of connection with others and to forge a path for making a difference in the spheres where we can make a difference.